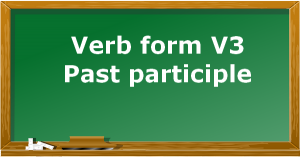 Here are four common uses of past participles:

Example: She has explained her attitude.

Example: The ideas explained to the management are important.

Example: The received goods were sold.