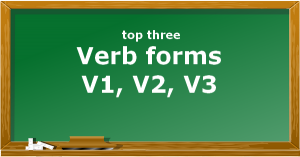 When we talk about verb forms, we usually mean the top three basic forms we use in English most often. These forms are referred to as V1, V2 and V3. Verbs are simply words that express action or a certain state of being. The three verb forms are helping us to express these actions in different tenses. The above mentioned verb forms are namely: the base form (aka the infinitive), the past simple and the participle.

There are some exceptions, though. For example, the verb ‚to be‘ has 8 different forms. See all its forms written and explained in the table below. On the other hand, the modal verbs (i.e. can, could, may, might, shall, should, will, would, must) have more limited number of forms.

V1 = the base form (infinitive)

This one is the easiest out of all. The base form is simply the root form of the verb referred to mostly as an infinitive without ‘to’. Root forms of verbs do not include any prefixes or suffixes. The root form of the verb is then used to create other forms of the same verb. This may not be applied to irregular verbs, since irregular verbs are not conjugated all the same way and their verb forms are very specific.

V2 = the past simple

The past tense form is created by adding –ed  (or just –d in some cases) to the end of the root form of the verb. As mentioned before, this does not apply to irregular verbs! The past tense of irregular verbs is created in all sorts of ways and the only way to feel completely sure while using them is to learn them by heart. See examples below.

We use the past simple tense mostly to talk about something that happened or existed in the past.

“I saw a great movie yesterday.”

“John woke up, opened the windows and started making his bed.”

“I visited my grandmother last weekend.”

The participles serve different purposes in sentences; they can function as adjectives or as parts of verb phrases. Participles are so-called non-finite verbs, i.e. verbs that, by themselves, do not show tense. Therefore, you cannot tell, simply by just looking at a participle, if you’re dealing with the present, the past or the future tense. There are two main types of participles: the present participle and the past participle.

The present participle is created by adding –ing to the root form of the verb. Present participles are most likely to be seen in progressive verb tenses, which show that a certain action is in the process of happening at this very moment.