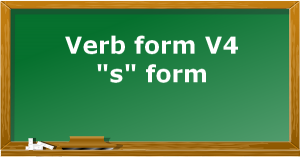 The –s form is used as the third-person singular. The verb is formed by adding –s (or sometimes –es) to the end of the base form of the verb. This rule applies to both, regular and irregular verbs, i.e. the –s form of the verb is always created the same way.