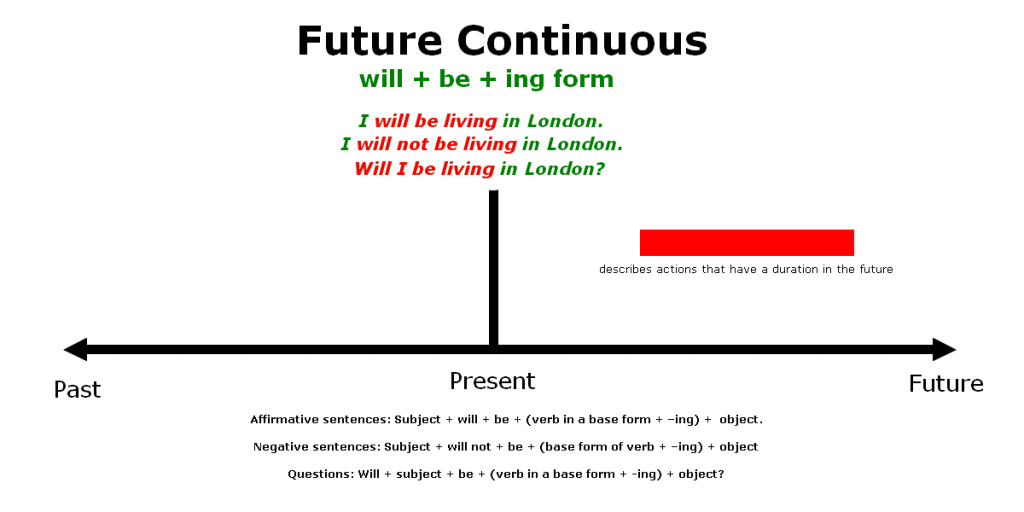 The future progressive/future continuous tense expresses events taking place in the future and is especially used for events that have a duration.

This tense is very similar to the other progressive tenses which also use the progressive aspect with the suffix -ing.  Although this tense is not used very often in English, it is still useful to know.

In total, this tense consists of three basic parts. The key verbs are the verb WILL, the verb BE and the main verb in its continuous form (i.e., the base form with the suffix -ing). The form of the main verb in this form is called the present participle.

Thus, the general form of verbs in the future continuous tense will be:

When is the future continuous tense used?

While the future continuous tense is not very often used in practice, it usually refers to events in the future that will take place at some point.

The most common use of this tense is to express future plans. The future simple tense can also be used in place of the future continuous tense as both will express the same action and have the same meaning.

Both sentences express the same information, that I will live in London, so it doesn’t matter which tense is used.

Emphasis on the duration of an action

When there is a need to emphasize the duration of an action and point it out, the future continuous tense is used. The exact time interval during which the action lasts is always given.

Continuation of an action

We also use this tense to express events that are already in progress and which we expect to continue for some time. These sentences usually contain words such as “still”.

If we know exactly when in the future the event in question will occur, we use this tense. Keep in mind that it is only used if we can undeniably say that we are going somewhere at a certain point in time.

Imagining the future or making assumptions

If we have an idea or assume some course of future events, we use this tense. These sentences usually contain words such as “think”, “guess”, “maybe” or “probably”.

A polite way of asking

The future continuous tense is also used to form polite questions. When you use this tense in a question, you appear more serious and polite.

Affirmative sentences in the future continuous tense are formed by using the auxiliary verb “will be” and the present participle of a verb with the suffix -ing. As with the future simple tense, there is no need to differentiate between the person or number of subjects. The same standard rule applies to each subject since we always use the form “will be + verb(-ing)”.

The form of affirmative sentences will therefore be as follows: 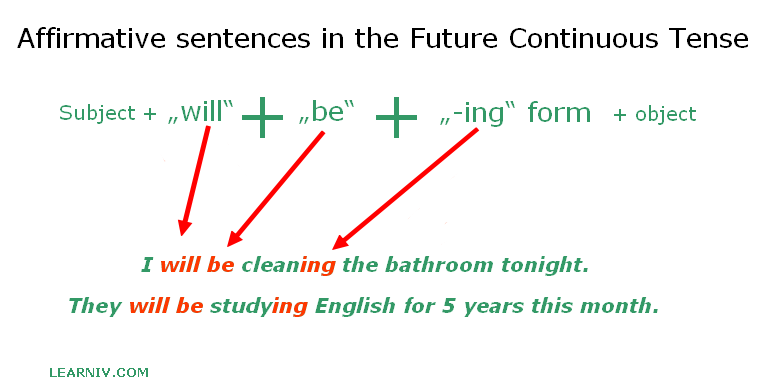 By simply adding the negation “not” right after the verb “will”, we get negative sentences. As is the case with affirmative sentences, there is no need to differentiate between any pronouns.

Forming questions is just a matter of changing the word order a little. In fact, the auxiliary verb “will” is always placed at the beginning of interrogative sentences and is immediately followed by the subject and the verb “be” in its base form. The rest of the sentence takes on the same form as affirmative sentences.

The structure of questions is as follows: 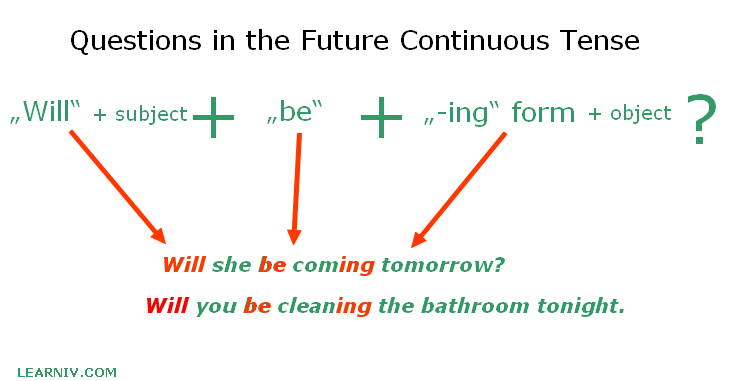 The difference between the continuous and simple future tense

The main difference between these two tenses is the description of the course of events. While the future continuous tense expresses events in the future with some duration, the simple future tense is usually used to describe sudden or non-long-term activities.

Abbreviations of the verb WILL

The verb WILL, like other auxiliary verbs, has an abbreviation which allows you to have a smoother and faster conversation. Abbreviations render sentences more light-hearted and are most suited when talking to friends or loved ones.

The verb WILL is abbreviated with “‘ll”, apostrophe included. It is added to the subject to form one word.

In negative sentences, the abbreviation of the verb WILL NOT is “won’t” and is added after the subject.