The future simple tense (also known as the simple future) is used to express future events. It can be used to describe spontaneous decisions, predictions, plans, or any other event taking place in the future.

This tense uses two basic auxiliary verbs to express the future – “will” and “going to”. Both of these verbs fall under the future simple tense and are used in its formation.

The verb “will” is mainly used to describe unpredictable events in the future. In contrast, the verb “going to” describes events that are planned.

No special knowledge is needed to form sentences in the future tense, you just need to know what the sentence structure looks like. Sentences using the verbs “will” and “going to” are formed quite
differently.

The verb “will” is probably the easiest to construct a complete sentence with as we don’t need to remember any special rules – all we need is a sufficient vocabulary.

In contrast, when using “going to” we need to differentiate between the number and type of person to identify the correct form of “to be” to use. As such, this is the more difficult form of the future simple tense.

The verb WILL is one of the most frequently used verbs to express the future. Therefore, we must know when to use it during sentence formation.

Affirmative sentences using the verb WILL

Affirmative sentences in the future tense are relatively easy to construct. We simply use the auxiliary verb “will” followed by the main verb in its base form.

Subject + will + the verb in base form + object.

Negative sentences using the verb WILL

To construct a negative sentence in the future tense, we need to add the auxiliary word “not” right after the verb “will”. The “not” is an adverb expressing the negative meaning of the sentence.

The rest of the sentence looks very similar to that of an affirmative sentence. Here too, we do not use irregular verbs or any suffixes. The sentence will look like this:

The structure of questions using the verb “will” look like this:

Will + subject + verb in base form + object? 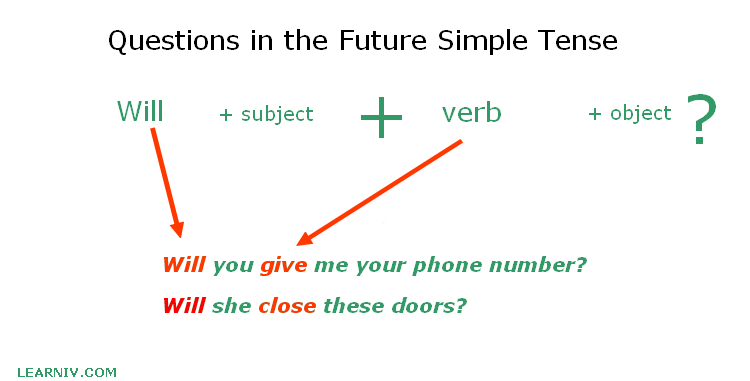 When do we use WILL in the future simple?

The verb “will” can be used in many ways as it describes ideas, promises, unplanned events, etc. in the future.

However, it is important to remember that we do not use this verb to express planned actions and events. If we know that an event will occur with 100% certainty in the future (the event is planned), we use the future simple tense with “be going to”.

The future simple tense uses WILL in the following cases:

If a future action or situation occurs that was not planned, the verb “will” is used. Similarly, we use this verb to express a spontaneous decision or any other event that was not anticipated.

We use the verb “will” when we hope that a particular situation will occur in the future. This could be wishing for good weather or wishing for something to happen or not to happen. In these cases, we usually also use verbs such as “hope” or “wish”.

We use the verb “will” when we have an opinion about something that has not yet happened. Since we don’t yet know whether we are wrong or not as we are simply speculating, we express this using the verb “will”.

When we make a future promise to someone, we use “will”. These can be serious and binding promises, but they can also be promises used in casual conversation. Terms like “really”, “promise” or “do” are often used in these instances.

When you offer to help someone, ask someone for something or make a request, we use the verb “will”. These can be serious requests in formal letters or they can also be informal requests of those around you.

When the main verb in a sentence is “be”, we can also use “will” for planned actions and events in the future.

Abbreviations of the verb WILL

Abbreviations are used for almost every auxiliary verb in English. The verb “will” and its negative form “will not” are no exception. These abbreviations save some time when speaking and writing long messages, but they also simplify the flow of conversation. We only use abbreviations when talking to friends, family or in other informal conversations.

It is important to know that we never use abbreviations when having formal conversations or speaking with, or writing to, an important and respected person. We always use full verb forms for conversation in the formal company as using abbreviations in these instances can be considered rude and disrespectful.

To abbreviate the verb “will”, we use its abbreviation “‘ll”, apostrophe included. This abbreviation is always added immediately after the subject. Once again, we do not differentiate between the number or the type of person in the subject.

Abbreviation of WILL NOT

The combination of “will” and “not” can be abbreviated to “won’t”. This abbreviation is used in sentences with a negative meaning and is quite common in most conversations.

The verb GOING TO

The verb “going to” is also used to express the future simple tense. It is used for predictions, intentions or unchanging plans in the future.

It does not take much knowledge of the English language to be able to construct a sentence using the form “going to”. We just need to know how to modify the verb “to be” into the correct form, depending on the subject.

It is always necessary to differentiate between the type of person and number of pronouns so that we know when to use which form of the verb “to be” (am/is/are). Once it is clear which form to use, only the auxiliary verb “going to” is added along with the main verb in its base form.

The general structure of the sentence looks like this:

The verb TO BE

The irregular form “am”

The form “am” is used in combination with the 1st person singular (I am). We can also use its abbreviation (I’m).

The irregular form “is”

This form of the verb is only used in combination with the 3rd person singular (He, She, It). It is also very common to see it abbreviated with an apostrophe (‘s).

This form is used to talk about the 2nd person singular (you) or plural pronouns (we, you, they). We can also use its abbreviation (‘re) instead, apostrophe included.

When to use the verb “going to”

The future simple tense is most commonly used to express future plans using the verb “going to”. In English, these sentences can be translated with the verbs “I am going to” or “I intend to”.

Another example where the form “going to” is used is to express any future intentions. We use this form anytime we intend for something to occur. Caution! Do not confuse intentions with wishes.

When we predict an event in the future (something that is perfectly obvious), we use the verb “going to”.

Usually, we only express events that are most likely to happen and where we can predict their unfolding according to some type of evidence. These predictions are referred to in literature as the “near future”.

If we are letting someone know of an obligation or have a command, we use the form “going to”. Often these types of commands are made by parents or supervisors.

Most of the time, these sentences are passive-aggressive.

Abbreviation of the verb “going to”

As with all other tenses, abbreviations are also used in the future simple tense. While the verb “will” is abbreviated with “‘ll”, the verb “going to” is a completely new word – we are talking about the verb “gonna“. This form was created by native speakers in an informal speech by contracting the original form of the verb.

Abbreviations are generally used in conversation with friends, family or loved ones and are commonly used in informal speech.

The form “gonna” can also be used without a subject but only if it is 100% clear what is being talked about.

Going to go, going to come

English often tries to avoid the combination “going to go” or “going to come”. Instead, only the present continuous tense is used with the verbs “come” and “go” to express the future.

Both sentences mean the same thing, but the shortened form without the verb “going to” is used much more often. Some professors even say that the forms “going to go” or “going to come” don’t even exist, so make sure to avoid using them altogether.