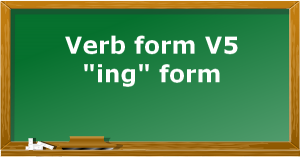 Just like the –s form, this one doesn’t need to be learned by heart as it never changes. The –ing form, used mostly as the continuous form of a verb, is created simply by adding –ing to the end of the root form of the verb, although there might be some slight nuances in spelling.