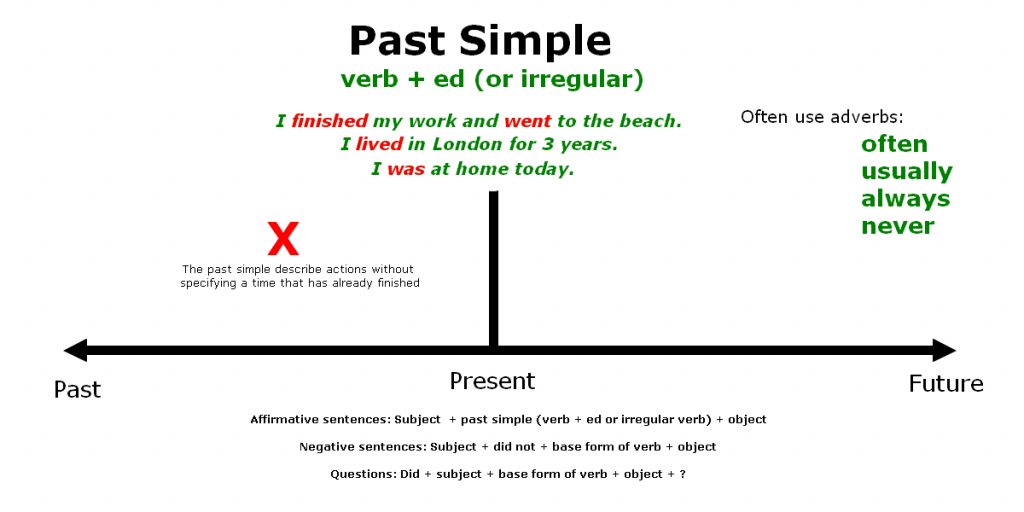 The past simple tense (sometimes called preterite, simple past or past indefinite) is the basic form of the past tense. This is one of the most common past tenses and can describe a lot of events. It is really important to know how and when to use this tense for daily conversation.

The term „simple“ is used because it distinguishes syntactic sentences from the auxiliary of the past perfect or past progressive tense. The past simple is one of the easiest tenses to learn, which is one reason why this tense is called the past simple tense.

Look at past simple tense examples.

When do we use the past simple tense?

The past simple tense is used to describe most events in the past. It is a very commonly used tense and it is really important to know how and when to use it.

Events in the past

The past simple tense is used to describe actions without specifying a time, but we do have to be certain that the speaker is talking about an event that has already finished.

We do not have to know when the event happened, we just need to be certain that the speaker is referring to a finished period of time.

This event could happen only once, or it can happen repeatedly. The past simple also describes events that have already ended and did not translate into the future. We use this tense to talk about something that was true for some time in the past.

The past simple tense is also used to describe past habits. When referring to past habits, the use of the past simple has the same meaning as the expression „used to“. These types of sentences are often combined with expressions of time such as: „often“, „usually“, „always“ or „never“.

Events that started and finished in the past

The past simple tense also describes events that happened in the past and lasted for a certain period of time, such as living abroad or some other action that lasted for a long time. These actions are specified by using time periods such as „the whole year“, „the whole week“ or „all day“.

The past simple is one of the easiest tenses to construct. The only problem is that there are irregular verbs that we must keep in mind.

Affirmative sentences in the past simple tense

The affirmative past simple is composed of a verb in the 1st form (infinitive) in combination with the suffix –ed. However, in English there are a lot of irregular verbs which we cannot combine with –ed. These irregular verbs have their own forms which we have to memorize.

As a result, this tense is actually much easier to use than the present simple, but only if we do not have to use any irregular verbs.

If we have a sentence with an irregular verb form then we must know its irregular past tense form, otherwise we are unable to construct a sentence.

We use „was“ in sentences where the first or third person is singular, meaning we use it for subjects such as „I“ or „He, She, It“.

„Were“ is used for subjects in other instances (You, We, They).

The verb „were“ is also often used to replace the verb „was“. It is very common in modern English, to find sentences that use „were“ instead of „was“ in combination with the subject „I“ even though it’s grammatically correct to use „I was“ instead.

„Were“ is also very often used to describe conditional causes.

Negative sentences in the past simple tense

To describe the negative meaning of a sentence it is necessary to use the auxiliary verb „did not“ or its short form „didn’t“ in combination with the base form of the verb (infinitive).

Subject + did not + base form of verb + object.

Negative sentences are really easy to construct. Pay attention – we never use negative (did not) with the past tense form (2nd form) of irregular verbs or in combination with verbs with the suffix –ed!

She did not went (go) to the theatre last month.

Questions in the past simple tense

To form a question in the past simple we need to use an auxiliary verb „did“ in front of the subject and the base form of the verb. „Did“ is the affirmative meaning of the verb „did not/didn’t“. „Did“ is also the 2nd form (past tense form) of the irregular verb „do“.

We always need to use two verbs. One is „did“ and the other is the basic form of the chosen verb. There are no exceptions for the verb „do“.

Conditional and dependent sentences in the past simple

Conditional and dependent sentences are very often used in English. They describe events that happened in the past and had there been changes to any of these events, the outcome would have been different.