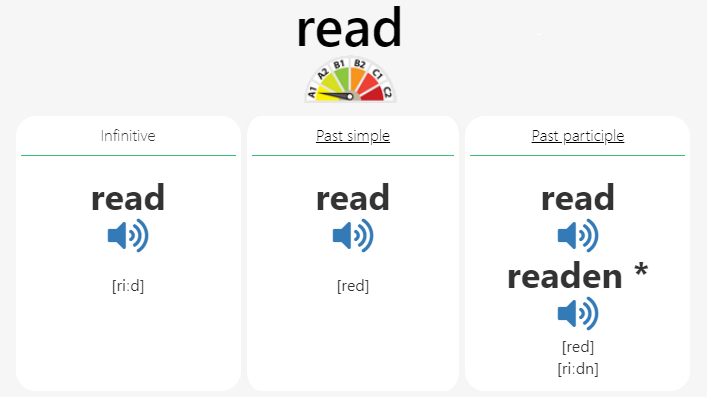 “Read” is one of the most necessary and commonly used verbs in the English language that you simply cannot live without. Below we explore its past tense usage.

The verb “read” is one of the so-called irregular verbs that we have to memorize. Fortunately, all the forms of this verb are exactly the same.

The 2nd form (past tense of the verb “read“) is seemingly the same as its infinitive form. The only difference is in the pronunciation.

While in the infinitive “read” is pronounced as / riːd /, in the 2nd form the pronunciation of “read” is / red /. Be careful to make the distinction between the two!

The form “read” / red / is used only in the past simple (read). It is used in sentences where an action has already happened, either once or repeatedly.

While the verb “read” is used only in positive sentences, it must be combined with additional verbs if used in a negative sentence. For the negative, we use the infinitive “read” in combination with the negative “did not“.

3rd form of the verb “read” is pronounced the same way as in the previous example – it means /red/, shortly.

The 3rd form of the verb is used in the past and present perfect. These are more complex tenses which are usually applied in longer sentences. The past perfect expresses events that took place before a certain point in the past.

“Had read” is used here, because the fact that I read your book led me to know it. The reading happened before a certain point in the event (before I knew it). Due to this sequence of events, we have to use “had read”.

I knew it (past simple) because I had read your book (past perfect).

Past continuous: ‘was reading’

The past continuous is formed by adding the verb “was” (for the singular of the 1st and 3rd person), or “were” (others). The suffix ‘-ing-‘ is added to the end of the verb “read”.

The past continuous tense is used when an activity occurred in the past or when the activity happened at a certain moment in time.

„We were reading this book all night.“

The exact time interval when the activity happened (4 hours) is explicitly stated in the above example. As a result, we use the verb “read” in the form “was reading”.

Do you now have a clear understanding of how to use the verb “read”, or do you still need some practice?