In our database, you can find the irregular verb ‘dive’ and we also prepared this simple image and PDF: 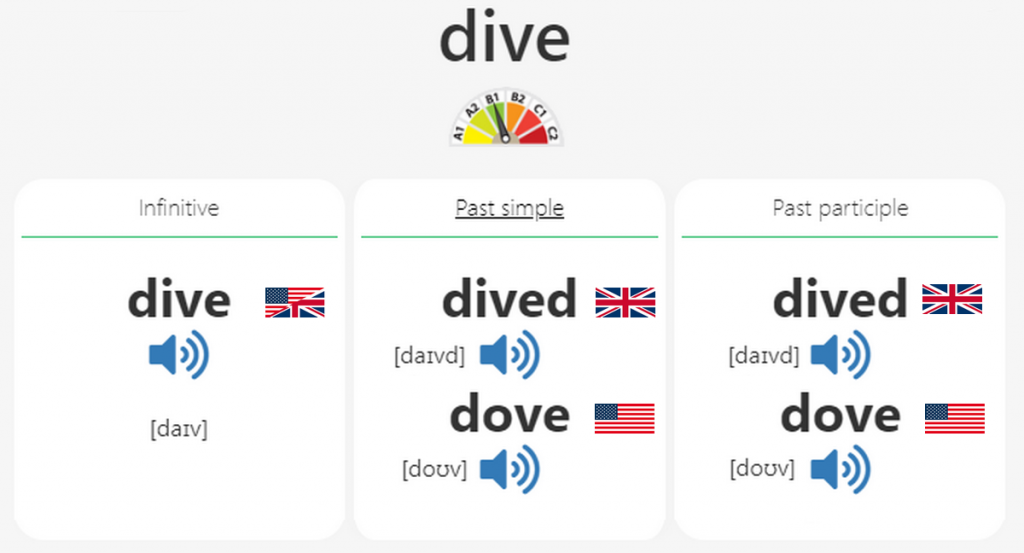 This verb has both an irregular and regular form. You can use both and both are correct. Speakers in North America use dove while the British seem to prefer dived.

“Dived” is the traditional past tense and past participle of “to dive,” but “dove” has crept in over the last two centuries — particularly in the US. This is probably a result of the verb “to drive” (with its past tense “drove”) becoming more common.

Historically, dive was a weak verb, so its past tense was dived. Dove is a relative newcomer, probably formed by analogy with drive–drove or strive–strove.

But which is the most used one, dove or dived? Let´s look at Google Ngram Viewer tool which displays a graph showing how phrases have occurred in a corpus of books over the years.

In the case of the verb ‘Dive’ we can see the same pattern with these verbs:

There are many other verbs with the same pattern though.

Learning patterns is a good way how to learn the irregular forms.

Examples of the usage `Dove` and `Dived`

The Oxford Dictionary says `Dive` means „to jump into water with your head and arms going in first”:

We can find very similar meaning in the Cambridge dictionary means „to jump into water, especially with your head and arms going in first, or to move down under the water”: