Conjugation of verb (past tense) applaud

Conjugation of the regular verb [applaud]

Conjugation is the creation of derived forms of a verb from its principal parts by inflection (alteration of form according to rules of grammar). For instance, the verb "break" can be conjugated to form the words break, breaks, broke, broken and breaking.

The term conjugation is applied only to the inflection of verbs, and not of other parts of speech (inflection of nouns and adjectives is known as declension). Also it is often restricted to denoting the formation of finite forms of a verb – these may be referred to as conjugated forms, as opposed to non-finite forms, such as the infinitive or gerund, which tend not to be marked for most of the grammatical categories.

Conditional of the regular verb [applaud]

Causality (also referred to as causation or cause and effect) is influence by which one event, process, state or object (a cause) contributes to the production of another event, process, state or object (an effect) where the cause is partly responsible for the effect, and the effect is partly dependent on the cause. In general, a process has many causes, which are also said to be causal factors for it, and all lie in its past. An effect can in turn be a cause of, or causal factor for, many other effects, which all lie in its future.

The conditional mood (abbreviated cond) is a grammatical mood used in conditional sentences to express a proposition whose validity is dependent on some condition, possibly counterfactual.

English does not have an inflective (morphological) conditional mood, except in as much as the modal verbs could, might, should and would may in some contexts be regarded as conditional forms of can, may, shall and will respectively. What is called the English conditional mood (or just the conditional) is formed periphrastically using the modal verb would in combination with the bare infinitive of the following verb. (Occasionally should is used in place of would with a first person subject – see shall and will. Also the aforementioned modal verbs could, might and should may replace would in order to express appropriate modality in addition to conditionality.)

Subjunktiv of the regular verb [applaud]

The subjunctive is a grammatical mood, a feature of the utterance that indicates the speaker's attitude toward it. Subjunctive forms of verbs are typically used to express various states of unreality such as: wish, emotion, possibility, judgement, opinion, obligation, or action that has not yet occurred; the precise situations in which they are used vary from language to language. The subjunctive is one of the irrealis moods, which refer to what is not necessarily real. It is often contrasted with the indicative, a realis mood which is used principally to indicate that something is a statement of fact.

Subjunctives occur most often, although not exclusively, in subordinate clauses, particularly that-clauses. Examples of the subjunctive in English are found in the sentences "I suggest that you be careful" and "It is important that she stay by your side."

Imperativ of the regular verb [applaud]

The imperative mood is a grammatical mood that forms a command or request.

An example of a verb used in the imperative mood is the English phrase "Go." Such imperatives imply a second-person subject (you), but some other languages also have first- and third-person imperatives, with the meaning of "let's (do something)" or "let them (do something)" (the forms may alternatively be called cohortative and jussive).

Participle of the regular verb [applaud]

I
applauding
you
he/she/it
we
you
they

I
applauded
you
he/she/it
we
you
they

Where do I start?


Use the button "Random choice"

Looking for a specific irregular verb? 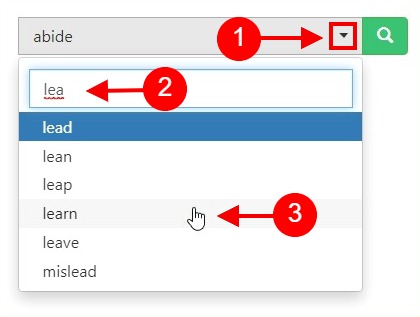